Research for The Commission for Relief in Belgium

I studied the papers of more than fifty CRB delegates that I found in numerous research libraries and institutions. Three critical archives and the primary papers I read within them are:

My archives are open to any legitimate researcher. They include hundreds of letters and a diary written by my grandfather, Milton M. Brown, while he was a CRB delegate (January 1916 to April 1917), as well as an extensive final report he wrote on the clothing department. From my grandmother, Erica Bunge Brown, I have a small diary (edited by my mother) and numerous photos she took during the war. In addition, I have from my great grandfather, Edouard Bunge, his extensive personal account, “What I Saw of the Bombardment and Surrender of Antwerp” which details his participation in the surrender of the city to the Germans.

I have also been trying to digitize as much of my archives as possible and sharing them with institutions in America and Belgium. I’m also posting some of them on Academia.edu.

As for sources, after decades of research, a comprehensive list of sources would be excessively long. To see the list that I have chosen as most appropriate, click the button below. 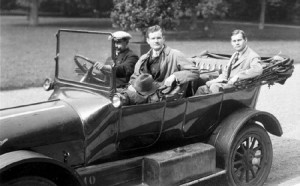 Currently, there is no definitive list that ties names with photos of those who helped or who were involved with the Commission for Relief in Belgium (CRB) during World War I.  Approximately 150 to 180 American men (and a few women) participated in some capacity in the CRB from October 1914 until April 1917 (when America entered the war).

To create a master list for future researchers, I began an online page as a way of crowd-sourcing photos and names. Help has come from descendants of CRBers as well as from professors of history, including  Professsor Branden Little, Professor Tammy Proctor, and Professor Margaret Hunt. Thanks to all who have helped. Currently, my original list has broken down into multiple lists that include:

With each entry, I’ve added dates of service, where they served, and any extra info I feel might be important.  My own Excel spread sheets on all these people run well over 100 pages. I’ve pulled my information for this master list from many sources, but the five primary lists I used were from Vernon Kellogg’s book, Fighting Starvation in Belgium,  Brand Whitlock’s book, , Robert Arrowsmith’s list made in Belgium, and the 1920 & 1929 official lists compiled by the CRB. Any differences I have with official lists come from numerous personal accounts of those in the field.